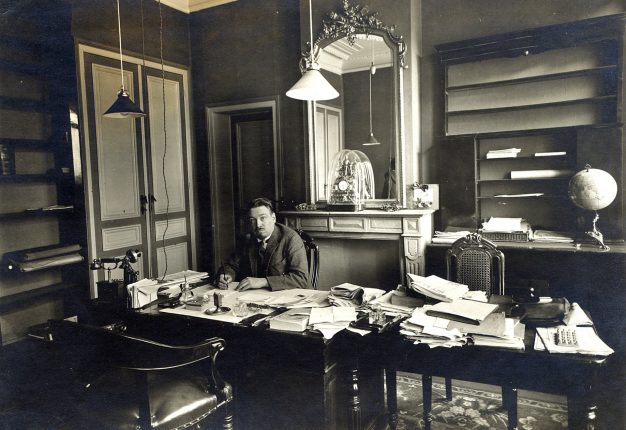 In addition to recognizing, preserving, presenting and participating, research is one of the basic functions of high-quality care for and handling of cultural heritage, as defined in the Cultural Heritage Decree of the Flemish government (24 February 2017). The Liberas collections are therefore accessible to researchers or anyone who is interested.

Liberas’ research team, in turn, conducts historical research into the cultural heritage of the liberal movement and persons, organisations and initiatives committed to defending and promoting the freedom of thought and action, from the nineteenth century until today. This is done in collaboration with colleagues from other collection managing heritage institutions and universities. Liberas’ research focuses on themes that revert to fundamental ideas and values within the philosophy of freedom of thought and liberalism.

When looking at the history of the liberal movement and the freedom ideal in all of its aspects, Liberas’ researchers affiliate with important recent trends in international historiography, such as the renewed focus on scientific biography as an academic genre, a focus on transnational interaction in the study of historical phenomena and the use of digital resources in the humanities for new research opportunities.

Research results are valorized with colloquia, lectures and publications (see publications section on this website). The research group operates both nationally and internationally. Liberas always welcomes proposals for cooperation, and supports work by other researchers that is based on its collections or which links up with the lines of research it initiates.

Themes and areas of expertise

Based on Liberas’ collection and/or inspired by the collection profile, Liberas’ researchers gain more insight into the historical evolution and social embedding of freedoms and rights that form the basis of liberal democracy in Belgium and elsewhere in Europe today. Members of the research staff use Belgian actors and institutions in the nineteenth and twentieth centuries against the backdrop of a broader European context as their starting point.

The main thematic pillars of Liberas’ research are:

In the policy period 2019-2023, this translates into historical research projects on, among other things, the struggle for the extension of women’s rights, the work and life of liberal journalists and writers, liberal magazines and publishers, small-scale entrepreneurship, the role of anti-clericalism and atheism within freethinkers’ movements and the development of the social sciences.